PLAYTIME (1967)
RECONSTRUCTION OF ROYAL GARDEN SCENE
Through Playtime, Jacques Tati provides his critical viewpoint upon the age of high technology. Playtime begins as a comedy but ends as a classic satire of modernism through Tati’s inventive choreography of contrasting the modern and the vernacular in architecture. In Cubed, Nikil Saval analyzes the film by stating that “... the message the film sends is of a civilization that has moved too fast, has grown too large, for its poor human inhabitants to understand … the electricity in the gleaming modern restaurants fails routinely; the brand-new architecture turns out to be poorly made and falling apart” (Saval, 184)
The Royal Garden scene in the film serves as a climax of Tati’s social satire with the gradual progression of confusion and chaos throughout the sequence. The restaurant space is a stage for the controlled madness where Tati explores how the boundary between public and private space disappears with the modernization of architecture, materials, and cultures. Although the scene ends with a complete mess, it still presents an enjoyable evening for all the guests. In serving such a scene, Tati carefully designed the restaurant space to show different areas within the space in an order that follows the progression of the chaos. The restaurant space continuously expands as the scene progresses, presenting different elements of disorder. With an aid of spatial expansion, Tati effectively illustrates the parody that he observed in a society moving towards modernism.
In Playtime, the apartments appear as a series of modular, box-shaped spaces, each with a large glass window that gives the audience a complete view inside. The spaces are so regular that Tati even uses the camera angle to make two apartment units appear as one - it seems as if the inhabitants are interacting with each other, until the angle changes and the audience understands the units to be separated. Tati uses apartment complexes to exaggerate the influence of modernism in the private sphere of residential areas - how, as modernism takes hold of domestic spaces, these spaces become indistinguishable from one another. Through this scene, Tati suggests that the idea of ‘home’ is no longer a unique, personalized space, but rather a modular unit that is simply one in a series of repetitions.
In this movie, the idea of a constructed, impersonal space in modernism goes beyond just the apartment location. Every space in Playtime is a built set, not a real-life location. Tati constructs enormous sets that act as their own built environments, which could be interpreted as a further expansion of his critique of modernism in that he sees modernism as a constructed and repetitive space. 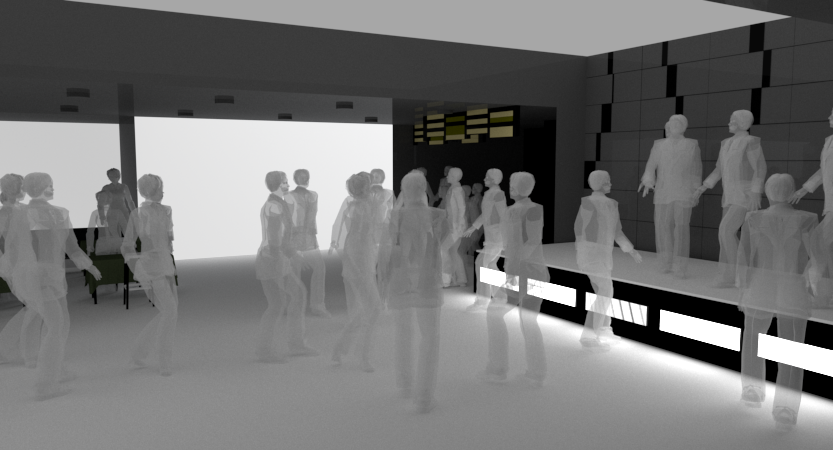 Interior perspective of the Royal Garden

Plan of the Royal Garden

Architecture of a pepper

SPACE as a memory

The New Normal
↑Back to Top